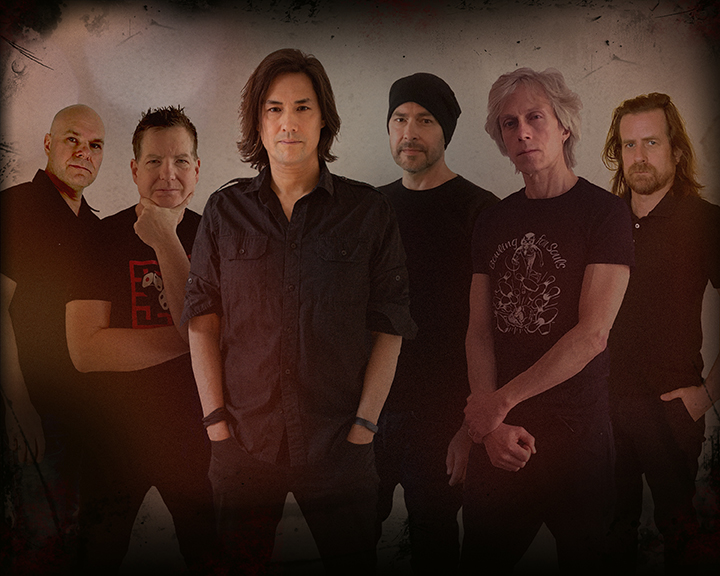 “End of the Ocean is all about peeling away layers,” explains Moist lead guitarist and producer/mixer, Mark Makoway “removing the bells and whistles and capturing the power and soul of Moist performing in a room. We didn’t rely on ‘studio magic’ – we went after something raw and visceral. In many ways, the making of End of the Ocean was about searching for the beautiful imperfections that make the presentation special.”

Nowhere is that more evident than on the album’s title track, a song that builds from a solemn bass and drum groove into a blazing all-out rocker on which lead singer/lyricist, David Usher, takes a biting and critical look at modern life, and how our increasingly disposable lifestyle coupled with the pace of technology change, is negatively impacting us and the planet. “I live in analog, trained to trust in feeling. And I live in technology, in love with my new shiny objects,” Usher says, “but these days it feels like we’re constantly racing, dealing with an endless stream of data, our days stuffed with online meetings, and passwords, and Netflix, and unsocial media, and always more stuff – a material culture on speed.”

That’s a sentiment Usher drills down deeper into the album’s lead single, ‘Tarantino’, a powerful and sardonic take on society’s unrelenting obsession with beauty and perfection and the band’s first single release since 2014’s Glory Under Dangerous Skies.

Lyrically, many of the songs on this, Moist’s fifth full-length studio record, were inspired by our society’s tendency for limitless consumption as a means of filling some unfillable void at the expense of our sense of self and collective well-being. But End of the Ocean itself is a sparse, powerful musical document that relies heavily on the band’s uniquely democratic writing process and a collective desire for connection that’s characterized the personal musical bonds the band members have formed with each other and their audience over time.

Those bonds have been integral to Moist since the very beginning says keyboardist Kevin Young: “The first time we sat in a room together and started to write we took this approach where nothing was sacred, nothing was off the table. We were honest and often brutally critical of each other’s ideas, but that only made our music, and our friendship with each other only got stronger over time.”

While that was as critical as ever in late 2019, when the band regrouped for writing sessions in Montreal with the intent of taking a similar approach they had applied to their 1994 debut breakthrough record, Silver, it became even more important when the pandemic hit mid-recording in 2020.

“After a really productive few days recording together in mid-March, on the literal eve of covid shutting everything down, we all retreated to our homes and used whatever gear we had there to finish the record, which meant we had hours to experiment, play and try new things,” says bassist Jeff Pearce. “It’s different than how we usually record, but what’s cool is how much End of the Ocean feels like the band sounds live – Especially considering how much of it we recorded apart from each other.”

In addition to the band’s founding members, Makoway, Pearce, Usher, and Young, the record also features the talents of rhythm guitarist Jon Gallivan and drummer Francis Fillion – both long-time members of Usher’s solo band and now with Moist since the Resurrection reunion tour in 2013.

The result is a combination of live-off-the-floor performances captured in Toronto’s Revolution Recording and individual tracking done in the band’s home studios. A project that relied heavily on the kind of fast-paced ‘guerilla recording process’ Moist adopted for their early albums, and also an extension of the DIY ethic they’ve applied to their collective creative output ever since.

That ethic is on full display on a quartet of companion videos for the album’s four singles conceived by the band and compiled and edited by Usher and Pearce. It’s also an approach that led to a sound that, although it hearkens back to the sound of alt rock anthems like ‘Silver’ and ‘Resurrection’, steps out from the band’s past efforts. Particularly in terms of the deep vocal arrangements on tracks like ‘Millions’ and ‘Party’s Over’ – a track that seamlessly combines Beatles-esque background vocals and the variety of urgent, alt rock Moist is best known for – and more low-key offering such as ‘Flesh and Bone’, or album closer, ‘High On It’ – a piano and vocal-heavy song that reads like a meditation on the ill effects of the kind of excess and toxic discourse foreshadowed by both the title track and fiery rocker, ‘Put the Devil On It’.

For new listeners and die-hard fans alike, whether they’re drawn to Moist’s music or Usher’s esoteric solo work, the overall message of End of the Ocean will resonate immediately. It’s all about connecting the dots – between our rampant desire for more and the impacts that may have on our collective future, and between people who (although they may hold wildly differing opinions and beliefs) are going to have to find common ground to ensure a viable future for everyone.

That’s been a defining element for Moist since the outset, one reflected in their work together and in the deep connections their music has fostered between the Moist and their audience via their music and high energy live shows over the past 25-plus years. It’s also a preoccupation that’s summed up elegantly on End of the Ocean’s opening track, ‘Ammunition’ – a driving, immensely hooky song that suggests that rather than seeing what sets us apart as fodder to tear each other down, we are better served by focusing on what binds us. As Pearce puts it: “Thinking of ‘Ammunition’ as a word to describe the strength, inspiration, or power that you get from another person.”