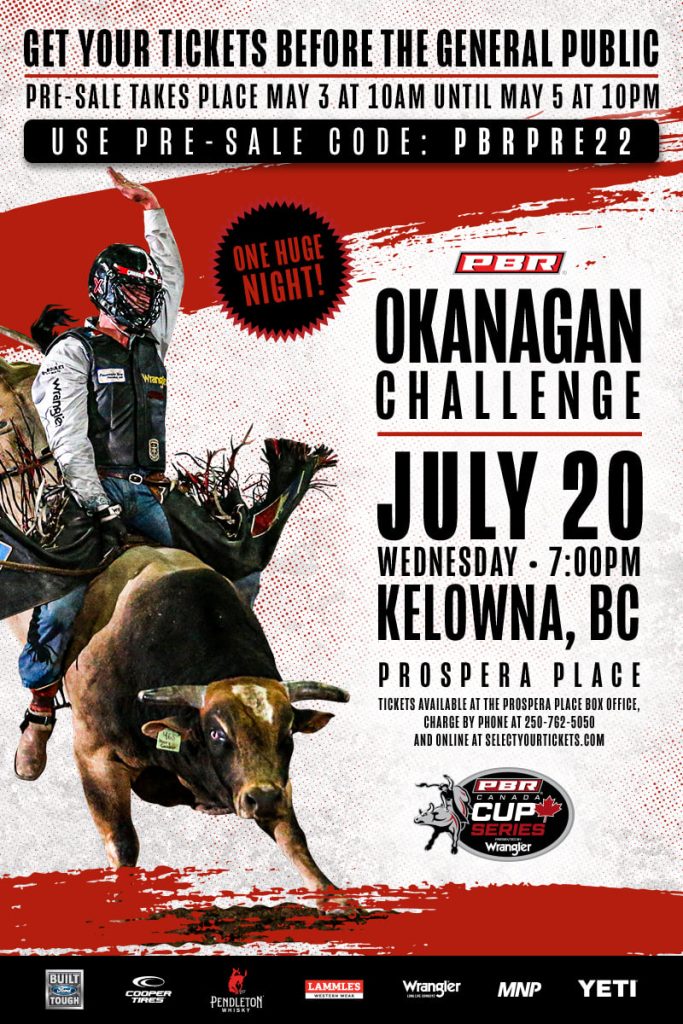 Tickets for the PBR Okanagan Challenge on-sale Friday, May 6 at 10:00 a.m. PDT

PBR Canada’s Cup Series regularly features Canada’s best riders alongside some of the league’s top international athletes, squaring off against the rankest bucking bulls from across the nation.

For one night only, fans will witness exhilarating 8-second rides and wrecks throughout the action-packed event as the PBR’s courageous bull-riding athletes face off against their 2,000-pound opponents.

The PBR Okanagan Challenge will mark the fourth event of the 2022 season for the PBR Canada Cup Series, presented by Wrangler. The tour will launch on June 11 in Red Deer, Alberta, and travel across Alberta, Manitoba, and Saskatchewan prior to arriving in Kelowna.

To begin the event, Richardson first made the 8 on Broken Trigger (Skori Bucking Bulls) for 86 points to finish second in Round 1. In the Championship Round he brought the crowd to its feet when he rode Finning Majic Shivers (Flying Four Bucking Bulls) for 86.5 points.

In 2017, PBR Canada held its first ever event in the British Columbia city as part of the Touring Pro Division. Brock Radford (De Winton, Alberta) won the stop, his second of a historic four consecutive event wins, as the only rider to deliver a perfect 2-for-2 performance. Radford, who double entered, also finished sixth at the event.

PBR Canada Cup Series’ return to Kelowna comes on the spurs of one of the most exciting, and historic, battles for the PBR Canada Championship in history.

After a dominant season, including four event wins across all levels of competition and a victory in one of the division’s special 5/5 Bucking Battles, Dakota Buttar (Kindersley, Saskatchewan) entered the 2021 PBR Canada National Finals with a firm grip on the No. 1 ranking in the race for the 2021 PBR Canada Championship, and accompanying $50,000 bonus.

However, a groin injury initially sustained at the final regular-season event of the year proved too much for Buttar to battle, inevitably sidelining him from competition the last day of the campaign.

With the title decided on the final outs of the year, 2018 PBR Canada Champion Cody Coverchuk (Meadow Lake, Saskatchewan) mounted an incredible come-from-behind surge, erasing Buttar’s 53.66-point lead, to conclude the year No. 1 in the nation, capturing his second career national championship.

The Saskatchewan contender clinched the title, and his share of the record $175,000 purse paid out at the year-end event, with an impressive 89.5-point ride aboard annual PBR Canada Bull of the Year contender Finning Lil Shorty (Flying Four Bucking Bulls).

All PBR Canada events are subject to change, planned in accordance with directives issued by relevant government and health authorities given the evolving regulations during the COVID-19 pandemic.

The 2022 slate of events marks the seventh season for the PBR Canada Cup Series as a unified competitive series traveling across the country and broadcast on TSN.